In order for us to be able to perform a MapReduce operation, we need the external data source to be set up with a resource manager.  In addition, one of the following two circumstances must be met:

For the purposes of today’s post, I’m going to focus on the latter.  Regarding condition #1, my hunch is that there’s some kind of in-built cost optimizer the Polybase engine uses to determine whether to spin up a MapReduce job.  If this is in fact the case, it’s important to note that there is no “cost threshold for MapReduce” option that we can set, so if you’re looking for ways to fine-tune MapReduce operations, you may have to be liberal with the query hints to enable and disable external pushdown.

Our MapReduce query is pretty simple:

The only thing I’ve done here compared to the basic query is to add a query hint to force external pushdown.  Let’s see how this changes things.

Note that my names for these streams comes from the order in which they show up in Wireshark.  They might have specific internal names, but I’m not going to know what they are.

Stream 0 appears to act as a coordinator, setting everything up and building the framework for the rest of the network operations to succeed.  This first stream has three major sections.  The first section is around basic tasks, like making sure the file we are looking for exists:

Once we know it exists, we want to create a job.  Eventually, that job will complete (we hope).

Then, after everything completes, we get file info for the staging work: 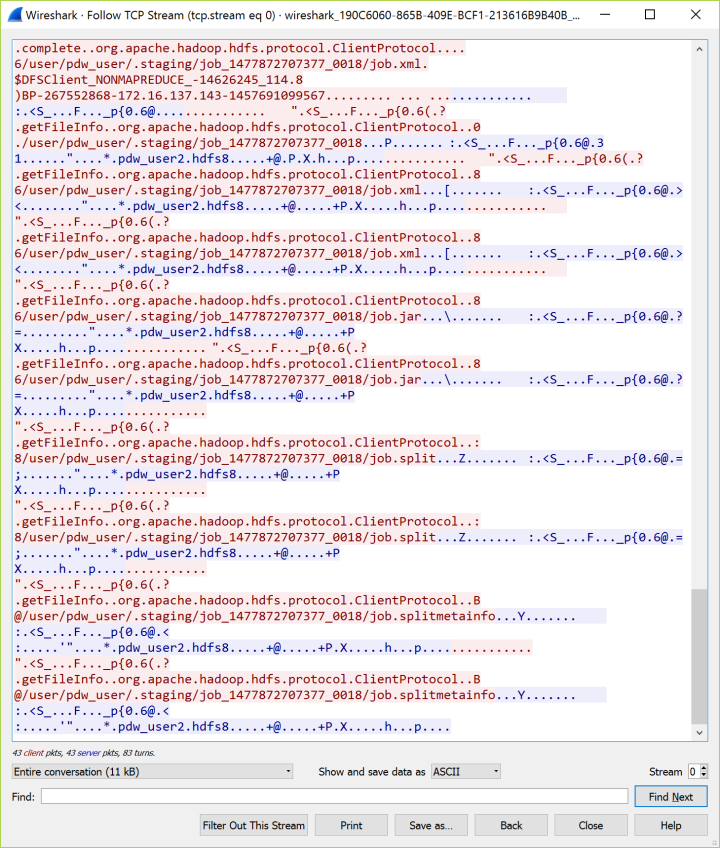 Stream 0 runs through the entire operation, with the earliest packet being packet #7 and the last packet being #20118 of approximately 20286.  We communicate with the Hadoop name node on port 8020 for this stream.

The next stream is Stream 1.  This stream does two things.  The first thing, which you can see at the beginning of the stream text below, is to prep the MapReduce job, including running /bin/bash to set the CLASSPATH and LD_LIBRARY_PATH.

After doing that, it regularly calls YARN’s getApplicationReport method.  When it gets word that the MapReduce job is complete, it finishes its work.

Stream 2 is the single largest stream, responsible for 18,864 of the ~20,286 packets.  We can see exactly why by looking at the beginning and end sections of the stream.  First the beginning: 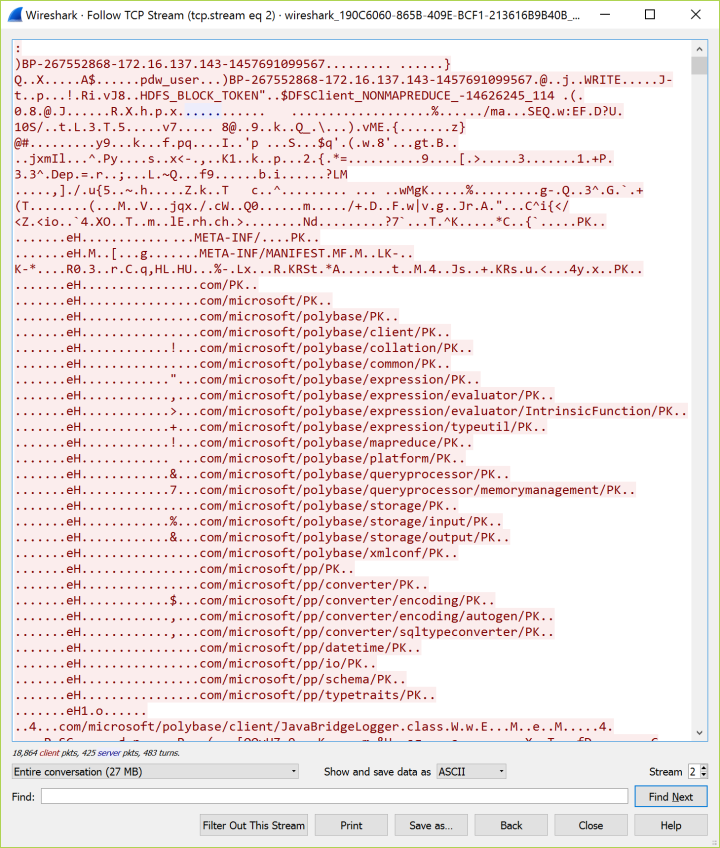 And now the end:

Stream 2 sends along 27 MB worth of data.  It’s packaging everything Polybase needs to perform operations, including JAR files and any internal conversion work that the Polybase engine might need to translate Hadoop results into SQL Server results.  For example, the sqlsort at the bottom is a DLL that performs ordering using SQL Server-style collations, as per the Polybase academic paper.

After the behemoth known as Stream 2, the rest of these are pretty small.

This stream appears to perform a block write operation.  It is responsible for most of the packets from 19830 to 19846.  This conversation takes place over the data node’s port 50010.

This stream follows up on the work Stream 3 did.

It appears to be writing metadata, and is responsible for most of the packets from 19853 through 19866.  This communication is happening over the data node’s port 50010.

After two tiny streams, we get back to a slightly larger stream.

As you can guess from the contents, this stream creates the YARN XML job and passes it over the wire.  The stream starts with packet 19875 and ends at 19968, using 83 packets to transmit the payload.  We connect to port 50010 to push the YARN config file to the data node.

Our next stream is of the “child on a long road trip” variety.

Basically this stream calls two methods as part of a loop:  getTaskAttemptCompletionEvents and getJobReport.  It looks like there might be a periodic call of getCounters or this may be triggered by something.  In any event, the loop continues until getTaskAttemptCompletionEvents gets back a result.  In my case, the result fired back $http://sandbox.hortonworks.com:13562 .”(.  Of note is that port 13562 is the default MapReduce shuffle port.

Stream 6 was responsible for 80 of the packets from 20103 through 20209.  One interesting thing to note is that the Hadoop-side port was 48311, which I believe is just a dynamic port and does not signify anything like many of the other ports we’re looking at.

This is another loop-until-done stream, but it ended pretty quickly.

This looped for getting file info and listing information by connecting to the Hadoop name node on port 8020.  It took packets 20210 though 20224, as well as a few wrapup packets at the end. 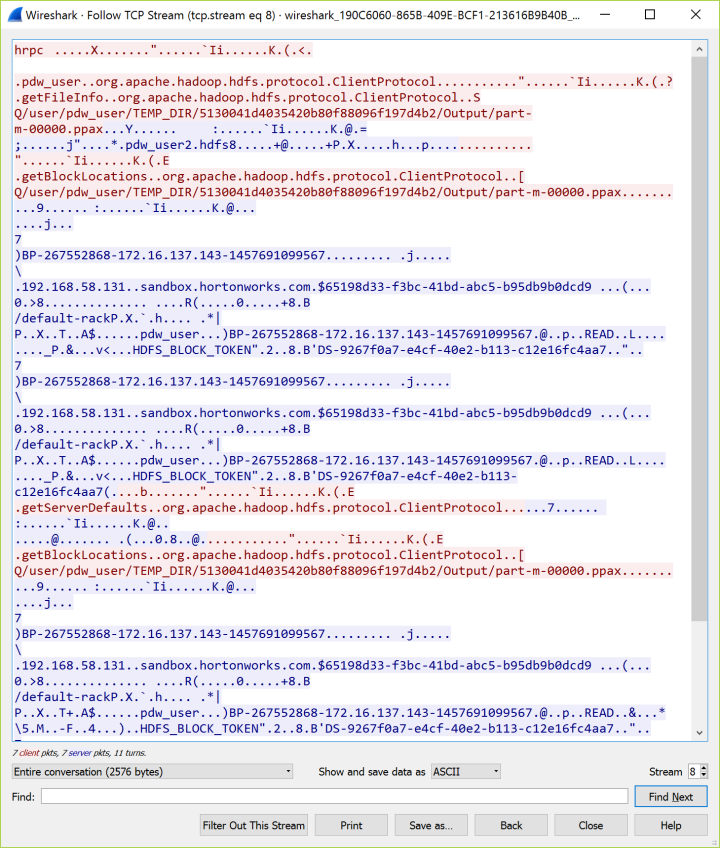 It first looks for a file called part-m-00000.ppax.  The PPAX format is a proprietary data format Polybase uses (the link is a Powerpoint deck that the current Polybase PM presented at SQL Saturday Boston).

For MapReduce logs, you’ll want to go to port 8088 of the name node, so for example, http://sandbox.hortonworks.com:8088/cluster.  On this link, we can see the various “applications” that have been created.

Clicking on one of these brings up details on the application, and we can see logs for each attempt.

If you click the Logs link, you’ll get to see the various logs, starting in short form and with the option to drill in further.

In this example, we can see that the stderr and stdout logs didn’t have much, but the syslog log had more than 4K, so if we want to see the full log, we can click a link.

Step 3:  The Rest Of The Story

Once we have the file available, it’s time for Polybase to wrap up the story.  We can see this in the DMV outputs: 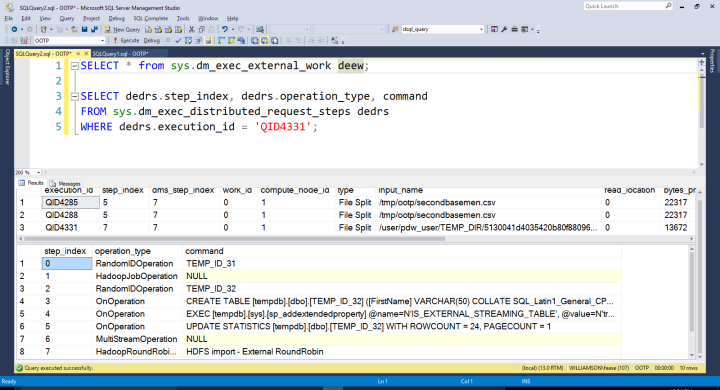 We can see that the dm_exec_external_work DMV looks slightly different, but still performs a file split.  But this time, instead of splitting the CSV file directly, we split the MapReduced file /user/pdw_user/TEMP_DIR/5130041d4035420b80f88096f197d4b2/Output/part-m-00000.ppax.  The operations to load the table are pretty similar to before, though:  we create a temp table, build statistics on the table, and then import the data using a round robin approach.