This is part five of a series on dashboard visualization.

Yesterday, I covered three visualization principles:  cognitive load, the idea that less is more, and a quick look at where the eye looks.  Today, I’m going to look at three more principles:

The Rule of Thirds

We typically think about the rule of thirds when looking at photographs or paintings.  The idea is that if you take an image and slice it into three zones horizontally and three zones vertically, people naturally gravitate toward the intersections of lines.  For example, check out the photo below.

A sample photograph showing off the rule of thirds.

In this case, my flower picture takes advantage of the rule of thirds.  The stem follows the bottom horizontal line, and the petals dominate the top-left intersection, with berries flanking the lines.

The rule of thirds can also work for dashboards.  For example, let’s take another look at the strategic dashboard from earlier: 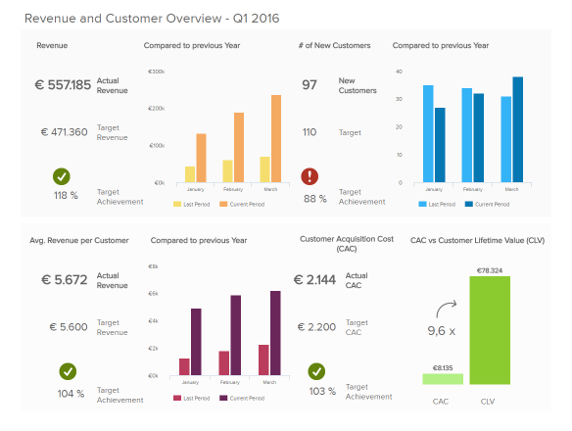 An example of a strategic dashboard. (Source)

If we put on gridlines, here’s what we see:

Adding gridlines to the strategic dashboard.

Just like with my photograph, you can see that the most interesting elements of this dashboard generally fit in the gridlines.  It would have been better if the dashboard developer could shift the graphs over to the left just a little bit, but you can see that the spots the eye gravitates toward generally will have the most interesting-looking visuals in them, and that’s a good idea.

This doesn’t mean that you absolutely need to follow the rule of thirds, but it is smart to keep this idea in mind.

Now we move on to one of my hobby horses:  glanceability.  This is a straightforward word with a straightforward meaning and a lot of implication.  The idea of glanceability is that a human can, at a glance, gain important information from your dashboard.  In other words, suppose you’re building a dashboard for the CEO as she shuffles from one meeting to the next.  She has about 5 seconds to look at your dashboard and make a decision.  If you can provide her accurate information that meets her needs within that five-second window, you succeed.  That is glanceability in a nutshell.

In a bit more detail, you can make a dashboard glanceable by following these guidelines:

Following these basic guidelines will make your dashboard a lot easier for people to read.

Color Vision Deficiency (aka color-blindness) affects approximately 8% of men and 0.5% of women.  There are actually several forms of CVD, each of which will affect people in different ways, but fundamentally it comes down to certain cones in the eye not perceiving light normally.  For example, 5% of men have deuteranomaly, in which the cones acting on green light do not fire as expected.  For the more extreme case, about 1% of men have deuteranopia, where they lack entirely green cones.

Where this can affect you is if you use colors which a person with CVD cannot differentiate.  For example, check out this bar graph:

If you have normal color vision, you can easily see the six colors:  pink, light blue, orange, green, purple, and brown.  But I chose each of these colors because they lead to trouble when used in concert.  For example, here’s what it looks like if you have deuteranopia (green cone deficiency):

The view for someone with deuteranopia.

Notice that the first two colors are practically indistinguishable.  I opened this image in Paint and the RGB codes were very close; not perfect matches, but so close that I can’t tell the difference.  Also note that bars 3 and 4 are really close, too.

Here’s what it looks like for someone with protanopia (red cone deficiency):

The view for someone with protanopia.

Now bars 3 and 4 are really tough to separate, and bars 1 and 2 aren’t that different either.  You can see that protanopia and deuteranopia have somewhat similar effects, which is why people talk about “red-green” color-blindness.

Finally, let’s look at tritanopia.  This is the least common type, with tritanomaly and tritanopia combining to affect approximately 0.5% of men and 0.5% of women.  So here’s what they see:

As a side note, tritanopia is pretty wild, almost like you’re living on an alien planet.  Everything just looks so red and pink.  Here’s the flower photo from earlier seen from the perspective of someone with tritanopia:

How someone with tritanopia sees our flower.  But hey, at least they can still see the gridlines and follow the rule of thirds!

Notice how we basically lose the green in this photo, replacing it with pinks and blues.

One last bit.  You may not think it makes much of a difference, but it’s the reason that SSIS no longer looks like this:

How SSIS used to look, back in the day.

That’s because if you’re protanopic, this image looks like:

Either way, making green and red indicate success and failure?  That’s a failure.

If you want to learn more, Martin Krzywinski has an awesome page on colorblindness.  I was able to piece together overlapping colors thanks to that resource.  I also used Coblis to show the effects of different forms of CVD.

This was an image-heavy post today, but that’s what I get for putting together a data visualization talk…  Anyhow, we covered three important visualization principles:  the rule of thirds, glanceability, and Color Vision Deficiency.  Combined with the first three principles, you have a lot of information at your disposal to improve your visuals.

Tomorrow, we’re going to continue the series by looking at a bunch of data visualization formats.  Stay tuned!

One thought on “Visual Principles, Part 2”