Last time around, I built a simple Azure ML experiment based on flight delay data made available to us as a Microsoft sample.  Today, I want to load a custom data set and build an experiment against it.

I’m using SQL Saturday data for this demo.  I came up with a set of data for each SQL Saturday.  This comma-delimited data file includes:

My plan is to regress Spoke against Region, Month, International, and Personal Connection to see if there is a meaningful pattern.  (Hint:  in reality, there is.)

Uploading a data set to Azure ML is easy.  In the Azure ML Studio, go to My Experiments.  Then, on the left-hand side of the screen, click the “Datasets” option.  To add a new dataset, click the [+] NEW button at the bottom and select Dataset –> From Local File.

Doing this brings up a modal dialog: 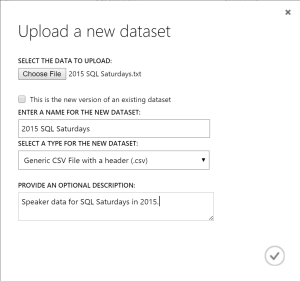 Uploading my hundred-row dataset took a few seconds, and now it’s available in the datasets section.

Our experiment is going to look similar to the one we did yesterday:  a simple linear regression.  Because the structure is fundamentally the same, I won’t walk through it in as much detail as I did yesterday.

I dropped my 2015 SQL Saturdays custom dataset onto the canvas.  After that, I dragged on a Project Columns component and selected the columns I want to use in my regression model:  Region, Month, International, PersonalConnection, and Spoke.

From there, I dragged on a Split Data component and split the rows 70-30 using random seed 21468.

When I ran this model, I got back my results in approximately 30 seconds.  My model results show an R^2 of 0.48, which is pretty good for a social sciences result. 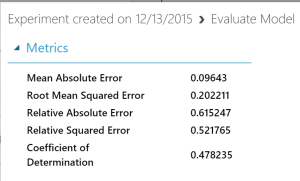 An interesting line of questioning would be, what would improve the R^2 here?  Maybe variables around how many other events there were, the size of the event, and whether I had just gone to a SQL Saturday the week before would help, but I’m satisfied with these results.  So now I’m going to go the next step:  setting up a web service.

Setting Up A Service

Setting up a web service is pretty easy:  click the “Set Up Web Service” button at the bottom of the dashboard.

Doing this changes our canvas and gives us a new tab:  Predictive experiment.

I want to do seven tests for the web service:

In these cases, the model was accurate 7 out of 7 times, and actually tripped me up once when I expected failure (because I had actually missed Kansas City in October).  If you’re a harsh grader, I expected Cleveland to be higher.

This is obviously a toy model with a small data set, but it shows the power of what you can do with Azure ML.  With just a few clicks, you can be up and running with a data set, and after building a web service, you can easily consume it in your own application.  This significantly shortens the development time necessary to go from a basic plan to a production process.