I bought my 2016 Mazda Miata two weeks ago. It’s only been two weeks, but I’m already declaring this car a success. I loved my 99 Miata, but this one is better in almost every way. The top is ridiculously easy to open and close, and I can do it one-handed with almost no effort. The layout took a day or two to get used to, but I’ve taken to liking the storage behind the driver instead of having a big center console. Even the behind-the-driver cup holder for sadists has grown on me.  The first time I drove back from lunch with a full drink and didn’t have to avoid it to change gears made me a believer.

One of the bigger pre-release controversies with this car was where Mazda put the navigation system knobs:  right behind the shifter. People were concerned that they couldn’t rest their arms in a good position with those,  but in my experience, I have had no problems. Granted, my arms are probably skinnier than the average person’s, but that area feels bigger than it looks.

As far as driving goes, it shifts so smoothly that you can easily hop from 2nd to 4th to 6th in regular traffic without missing a beat. Gas mileage is good with me averaging about 32mpg, with probably a 50/50 split between highway and city driving.

Now for how it looks. There was only one style that I wanted:  black leather, a black exterior, and black top. 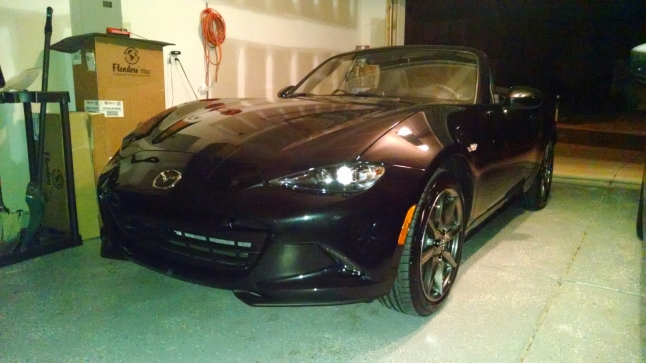 This car looks great. It’s what Batman would drive on vacation. I’ve had a number of people compliment the looks, and coming back to my car from lunch one day, I saw a couple of guys walking around ogling it. After talking to them, I found out one of them has an ’89 model, itself a thing of beauty.

For Miata fanatics, the last decade has been a letdown. The NC model of Miata has gone from kind of sleek to heavy and stale. With the ND model, they definitely stepped up, and I highly recommend the car if you are 6 feet tall or shorter…and if you can find it… I had to get my dealer to Shanghai a car from a boat headed to some other dealer.

One last note:  the navigation is easy to read even with the top down. The colors wash out, understandably, but it’s still visible. As far as in-car calls go, I’ve tried this feature twice. The first time, I had the top down and was on a freeway. I could hear the caller but I had to shout to get the caller to hear me. The good news is that engine and wind noise were not dominating the microphone, although my caller could definitely tell that I was driving. With the second call, I had the top up and was driving about 55-60.  That call was clear on both ends. So if that’s a major concern for you, rest easy knowing that you can actually make phone calls in a Miata. But honestly, you’ll probably be having too much fun driving to want to talk anyhow.